Charles E. Emery (1898-1957), a veteran of World War I and World War II, settled in Annapolis with his family in 1945. They lived for a number of years on Duke of Gloucester Street in Annapolis’s historic district. He served as the first president of historic Annapolis in 1952 and 1953, and was a founding member of the Annapolis Camera Club.

Upon his death, the negatives that he had meticulously labeled and filed in metal file drawers were stored in a closet, where they remained, untouched, for 50 years. When his granddaughter, Dorothy Glendinning, discovered them, she found that only a few of her grandfather’s negatives had decayed with age. Most remained in excellent condition. They date from the 1930s to the 1950s. The collection contains about one-thousand images. Emery was a retired marine corps lieutenant colonel when he passed away in 1957 at the age of 59. His grave site is in Arlington National Cemetery. These photographs are courtesy of the Annapolis Collection Gallery. 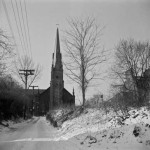 View up Newman Street toward St. Mary’s Church, circa 1948 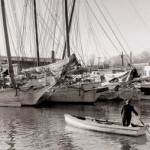 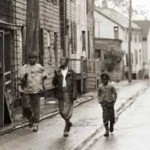 Three friends running in the rain up historic Pinkney Street, circa 1948 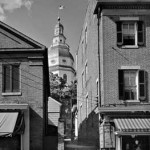 The Capital Restaurant sign on Main Street offers “Tables for Ladies,” circa 1949 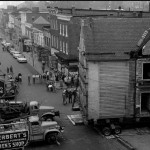