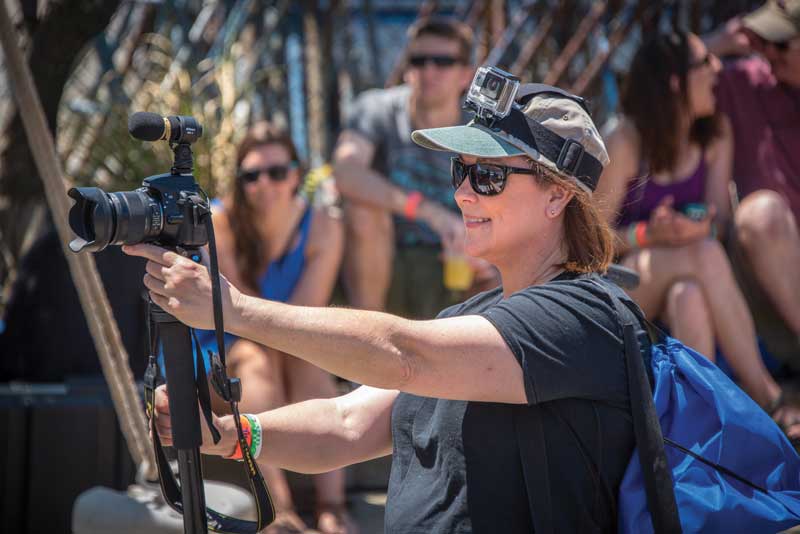 Annapolis is mourning the passing of Jeni Parris Brady. She moved on from this earth on April 28, 2019.

As the founder and operator of NaptownMusic, Jeni chronicled an ocean of local musical happenings, turning herself into a one-woman public relations mogul. She wouldn’t go to just one show and record it; she would go to all of them in one evening, every night of the week that she could. She was much like a mountain, ever present, ever protective, and always grounded, as she worked tirelessly to find, support, and promote musical performances. All of us were convinced that she had a body double or had cloned herself.

If you ever saw her at a show, snapping photographs, videotaping, and recording audio, then you saw her in her element. She was always up front—near the stage, by the wings, or wherever the best visual vantage point was—standing with or holding her equipment, enjoying the music. She always had a smile and a hug to share, no matter how exhausted she was from immortalizing the performances of our musical lives. NaptownMusic wasn’t merely her passion, it was her truest and deepest love. And our gratitude is as boundless and enduring as her commitment was to all of us.

There is no way we can fill her shoes, but we can occasionally try them on for size. We can be her legacy. If you are at a show, snap a couple pictures of the band and post them. Record a tune by the musician in the corner and share it with friends. Promote each other’s events. Get the word out to support your local musicians and artists, in her honor.

Jeni made every musician she encountered feel like a star, but she was the real star.

We love you, Jeni.