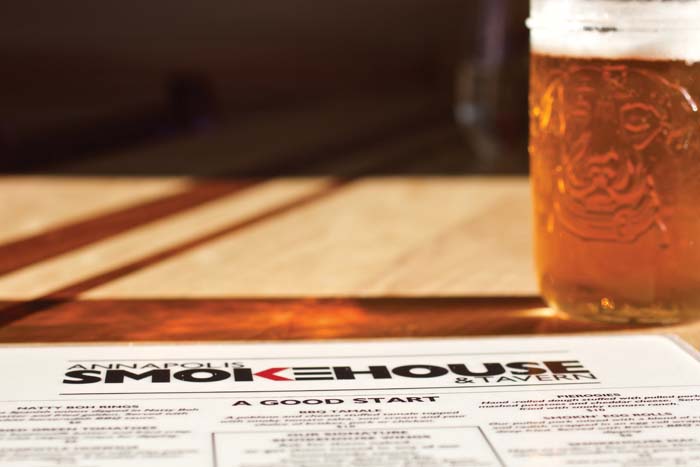 One hundred and twenty pork butts weigh roughly 2,070 pounds. That’s how much heft the smoker at Annapolis Smokehouse & Tavern can bear. Since most of us may not be as fluent in pig-butt lingo as the crew at Smokehouse is, let’s think about André the Giant. He was seven feet, four inches tall and weighed 520 pounds. Which means that the smoker could fit four Andrés. That’s a big smoker. 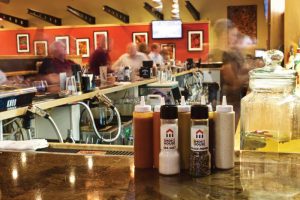 The wood-burning, flame-shooting beast of a machine is cumbersome and takes up more space in the kitchen than the freezer. When Jen Krohn, her husband Steve Gaines, and his brother Ryan Gaines opened Smokehouse in 2012, no establishment in Anne Arundel County had a smoker that large. The entire restaurant was built around it. Smokehouse is the body, and the smoker is the heart.

It beats seven days a week, with little down time. While Smokehouse sleeps, the smoker works dutifully. At 4 a.m. every day, the pit master, Doug Walden, arrives and acts as an alarm for the restaurant. He wakes up the kitchen, straps on his apron, and starts his daily routine of hand-rubbing and hand-injecting the chicken, pork, ribs, salmon, brisket, and other meats in preparation for the day’s requirements.

The rest of Smokehouse begins to wake as the head chefs, line cooks, and waitstaff begin to prepare for the 13 hours between 11 a.m. and midnight. All restaurants have hours of prep before their doors open, but Smokehouse takes it to the next level by properly timing certain dish components that need to be smoked for 14 hours before leaving the kitchen. 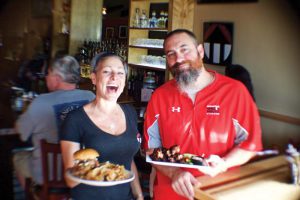 Ensuring that all dishes, especially the ones with the long smoke times, enter the dining room perfectly cured and seasoned takes an equally cured and seasoned team of people. Krohn hires waitstaff who know what they’re doing so she can feel confident that jobs are getting done and customers are happy without having to micromanage. This allows her and the kitchen staff to focus on the food and the menu, which changes every six months. For the three years that Smokehouse has been around, its dedication to the food has been recognized and is shown by the awards that stuff its shelves. Top prizes include “Best Wings” in 2013 from Reader’s Digest, Best of Annapolis, and Chesapeake Wingstock Festival, “Top 30 Best Barbecue Restaurants in America” in 2014 from Open Table, and “Best Burger” at the Annapolis Bud and Burger Battle in 2015.

Those accolades demonstrate that Smokehouse understands the ins and outs of barbecue, right down to the sauces, and Krohn will tell you her favorite combination is Fire Sauce and Alabama White. But she also recognizes that barbeque is not everyone’s favorite meal. To that end, Smokehouse’s menu is geared toward American cuisine, offering dishes such as smoked fried chicken breaded in homemade potato chips, and a veggie burger that gets the same smoker treatment as the meats so that vegetarians, too, can taste the Smokehouse magic.

While first-time visitors come mainly for the food, patrons return for the atmosphere (and the food) time and time again. And although awards are nice, Krohn validates her success through her plentiful regulars. It’s difficult to have a conversation with her without someone coming up to hug, kiss, or engage in small talk. 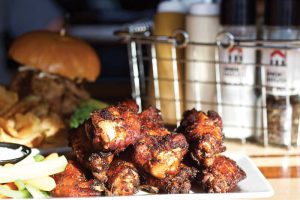 Complementing the aromas that circulate the air at Smokehouse, its floor-to-ceiling collection of art changes every three months—except for the 17-foot, hand-carved alligator by local artist Charles Lawrance. It peers down over the bar area, as if serving as the tavern’s official voyeur. The art styles vary, from popular Baltimore graffiti artists to amateur artists showcasing their work. Smokehouse has sold over 100 pieces of art, without taking any commission, since it opened its doors.

But if it’s not the art or food that keeps people coming back, it could be the welcoming bar that sprawls the length of the restaurant and hosts a daily happy hour. It’s possible that the wafting scents of chipped wood or deep-fried Oreos seduce passersby. Others come for karaoke on Tuesdays, trivia night on Wednesdays, live music on Fridays, the three-dollar mimosas and Bloody Marys on weekends, or the dog-friendly patio. When they aren’t dining in, many of the restaurant’s patrons bring their own meats to be smoked, a treatment that their at-home family dinners would otherwise not receive.

Inevitably, new diners quickly become regulars because Krohn and her Smokehouse family know what they are doing. As long as they keep adapting and expanding, one can only guess what they’ll be up to over the next few years. █ 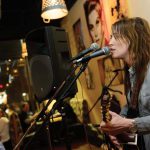 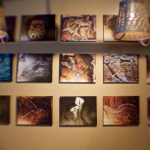 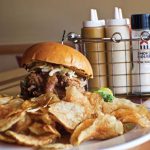 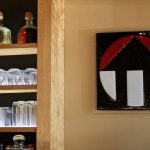 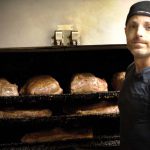 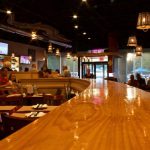 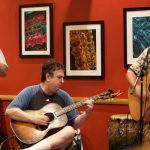 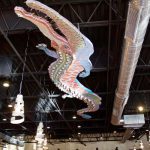