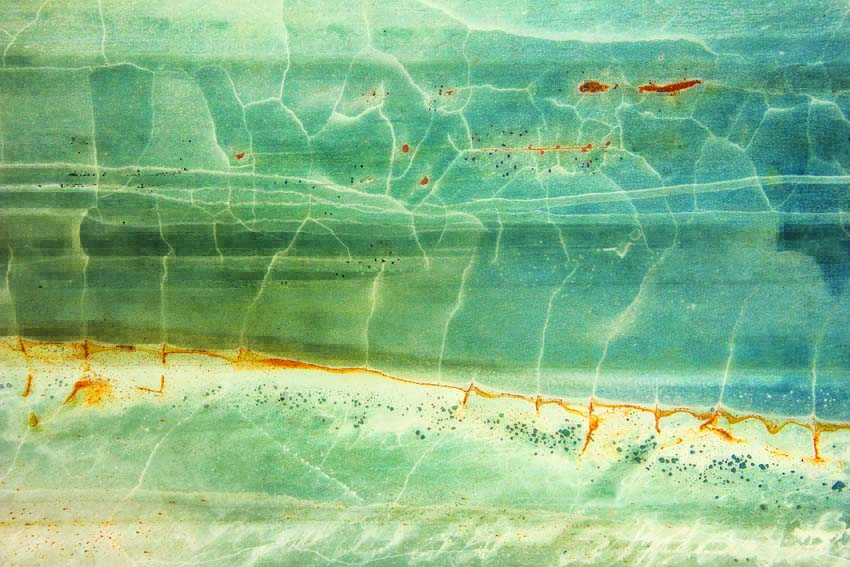 Upon initial glance, Janet Jeffers’ photographs could be anything. Their shapes and colors conjure different ideas in different imaginations. That, she acknowledges, is their beauty.

“[I ask] people to engage with the photograph[s] and ponder the mystery or assign their own meaning,” she says. “People look at them and say, ‘Oh, this looks like this or that. That looks like a grove of trees. Or waves. Or butterfly wings.’ It’s interesting how everybody interprets a picture, and they see things that are not actually related to the subject I photographed. It’s almost like a little Rorschach test.”

With a background in graphic design, interior design, and broadcasting, Jeffers gradually segued into professional photography. She started taking photographs as a hobby when she was in college and a friend gave her a classic Pentax K1000 with a 50mm lens. With camera in hand—and pockets full of film rolls—she went around taking pictures, keeping an open mind and always experimenting with the way she captured the world around her.

As a beginner, she gravitated to sunsets, flowers, and landscapes. “Nature was definitely my first inspiration, and it remains a huge part of my practice,” she says. “But the more I practiced, the closer I looked, and the more I noticed plays of light and shadow, form and texture, and color — in less expected subjects and in less predictable ways.”

Slowly but surely she gained a following. She also upgraded her equipment, beginning with a Nikon SLR in the mid ’90s, then to her first digital camera, a Nikon D100, in 2003. “I was already comfortable working with digital images on the computer from my work as a graphic designer, so I was quick to embrace digital,” she explains.

Sticking with the Nikon platform since then, she has accumulated a collection of Nikon-compatible lenses that help her achieve her artistic shots. Her favorites are her Nikon 105mm macro lens for getting closeups and her 28-300mm zoom lens for walking around and capturing wide scenes or zooming in to explore smaller details.

She turned her focus to professional photography full-time in 2009. Her work has become part of exhibitions throughout the Mid-Atlantic and has graced the covers of books and magazines, appeared in films, and been adopted as part of permanent installations for University of Maryland Medical System and Pharmaceutics International, Inc.

Jeffers set up studio in the historic Bromo Seltzer Arts Tower in downtown Baltimore, where she not only gets work done—when she isn’t photographing internationally—but also engages with visitors about her pictures on display. If people stop by on a Saturday when Jeffers is there, they will find she has what her friend and collaborator Jillian Storms describes as “a rare gift of being both introverted to do the intricate work she does and extroverted to share it so generously.”

Jeffers calls the relationship between graphic design and photography inescapable, and her pictures reflect that—they are organized, clean, without distractions. Many are formatted vertically. “I think the principles of design are so ingrained in me that I can’t help using them in photography,” says Jeffers.

While her photographs appear to be abstract images, they are actually extreme close-ups of various parts of the natural and built environments. Blue Bow, which depicts a detail of a boat from a marina near Annapolis, appears at first glance to be a piece of blue quartz. Dark Grove looks as if it could be a line of trees at twilight, but it’s actually a piece of metal from a scrapyard in New Jersey.

When viewed close up, what is commonplace or ordinary becomes surreal and fantastic; what is ugly becomes beautiful. Jeffers loves that her photographs can make people look closer at something such as a rusty dumpster or decaying farm equipment and see the splendor
in it.

Her work has captured the attention of other artists with whom she interacts, including Craig Hankin, director emeritus of the Center for Visual Arts at Johns Hopkins University. He admires Jeffers’ ability to make her viewers pause and gain a different perspective. “Her eye for color and composition is simply ravishing,” he says. “Her ability to find beauty everywhere, especially in the things that most people would ignore or discard, is truly a gift.”

Jeffers rarely heads out for a shooting session knowing what she is going to find or in search of anything in particular. Instead, she ventures forth with an open mind and a curious spirit, wondering what she is going to find, that day. “Sometimes, it feels like I’m going nowhere, and sometimes something will click,” she says. “I start getting closer to a subject, and something will pop out. There’s some bit of magic happening, and I’ll find an area that speaks to me.”

She recalls a time when she went up to Longwood Gardens in Pennsylvania to take botanical shots. As she headed home after taking many satisfying photos, she passed an old farm truck on the roadside that caught her eye in the last light of day. She pulled over to take a closer look. “I found this detail of a swooping yellow form on a blue background, which almost looks like some sort of flying bird or dragon soaring down from the sky,” she says. “It seems so far removed from the subject of its origin; it’s always stuck with me as a moment of awe.”

Storms, an architect with the Maryland Department of Education, adores Jeffers’s eye for goodness and beauty. “She is a positive person, seeing the good in others . . . even the good in what has been abandoned, like her photo series of rusted vehicles—exquisite beauty,” says Storms. “And she is down to earth. She never disparages or casts aside others. It’s refreshing!”

Storms finds herself most drawn to what she describes as Jeffers’s brilliant but balanced color fields and the way she captures textures and patterns. She envisions Jeffers’ work looking amazing at grand scale, covering the complete wall of a building.

Jeffers also sees taking her work in that direction. “I want to keep moving beyond a framed print on the wall,” she says, admitting that the interior designer in her is thrilled at the thought of seeing her work turned into murals and installations. “I find that really appealing, and I’d like to work with more designers and architects,” she says. “I love the idea of my art being integrated into a space in a way that defines it.” █

Learn more about Jeffers and her work online: www.janetjeffers.com.
The Bromo Seltzer Arts Tower is open
to the public every Saturday from
11:00 a.m. to 4:00 p.m.