After ordering some bread, Dimitri Fotos launches into his ebullient, musical laugh over his Greek salad at Metropolitan Kitchen & Lounge. “A Greek would never have salad without bread,” he chuckles. Through a beautifully absurd twist of fate, Fotos’ last name, which was shortened from Fotopoulos by his grandparents, homophonously hints at the driving force behind his life: photography. In his pursuit of his art and profession, Fotos has created a name for himself in the photography world and a lifestyle that nurtures his do-it-yourself brand of resourcefulness.

Born in Annapolis in 1955, Fotos’ interest in photography took root when he was a boy. He started taking pictures when he was five years old, and grew more interested when he started working with his parents’ German-made Rolleicord after his own cheap, toy-like cameras fell apart. In his middle school years, he spent time at Miller’s Camera on Maryland Avenue, a popular weekend hangout for bohemian types, where he met camera and photography enthusiasts who helped him choose and operate equipment and nurtured his budding skills. In ninth grade, he began building his own darkroom in his cellar. Working on his own, he found that it took some time, and trial and error, to figure out the developing and printing process. He laughs, “I was putting the paper in upside-down, and getting this beautiful soft focus effect . . . it’s one of my dark little secrets.” When he finally got it right, the experience of watching a print develop was magical—one that left an indelible impression on his young mind.

In those formative years, Fotos became a member of the Annapolis Camera Club, where he met well-known local photographers such as Dick Bond, Marion Warren, and Dick Kibbey. From these mentors, he received encouragement and tips for improving his technique. In eleventh grade, he took a photography class taught by Bond.

After graduating from Key School, and at the recommendation of art teacher Eric Dennard, Fotos moved up north to study at the School of the Museum of Fine Arts, Boston. He immediately made waves—his work was singled out by visiting artist Amos Chan. Influenced at the time by photographers such as Lee Friedlander (with whom he studied), Diane Arbus, Edward Steichen, and Henri Cartier-Bresson, Fotos used his resourcefulness and eye for irony, photographing human subjects in run-down arcades, street scenes, and other everyday landscapes, with a twist of the absurd or surreal. While in New England, Fotos earned some classroom credits at Tufts University. He then enrolled at the Corcoran School of Art in Washington, DC, and received a bachelor of arts.

After his time at the Corcoran, Fotos returned to Annapolis, where he worked in his family’s restaurant, Dimitri’s LTD, located on Main Street. He gained experience through art shows at the restaurant, commercial assignments, portraiture, and some wedding photography. He later worked in a few photography labs—including NASA’s space imaging lab—until 1990, when he established his own business, aptly named Photos by Fotos.

Although a traditionally trained photographer, Fotos jumps on every opportunity to use technology to expand his artistic repertoire with digital imaging and printing. This gives him the capacity to print large-scale works, sometimes on canvas.

In his home and studio, Fotos has stacks of salvaged flat files full of his life’s work. It includes a myriad of portraits, landscapes, and cityscapes of Annapolis—including an aerial shot of the State House, a spherical panorama of Saint Anne’s Church on Church Circle that was created from 48 separate images, and the Park Place site while under construction, viewed from atop a 225-foot-high construction crane.

In 2005, Fotos’ show at 49 West Coffeehouse, Winebar & Gallery, Facing the Music, featured photographs of over 30 local musicians. He used a 1920s eight-by-ten-inch film view camera and made large black-and-white prints, some as big as thirty-by-forty inches. To promote the show, he drove a wildly painted 1967 Volvo 122 with a fake string bass mounted to the roof around town.

He is currently documenting and archiving his work and gearing up for a show at Metropolitan Kitchen & Lounge. The show will focus on Fotos’ photographs of the West Street corridor, showing scenes from the 1960s through the 1980s, juxtaposed with current shots of the area.

In addition to photography, the energetic artist dances tap and swing in his spare time. He took up mountain biking 18 months ago, and is blending biking with art, documenting the creation of a single track mountain biking and hiking trail at Bacon Ridge Natural Area in Crownsville. Again, with his characteristic laugh, “I’m almost 60, and I’ve just learned how to do a wheelie!” █ 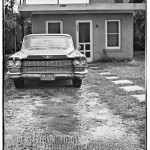 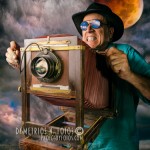 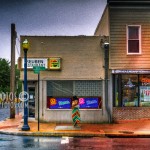 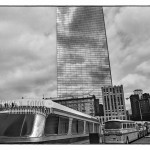 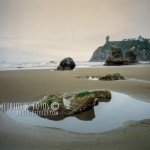