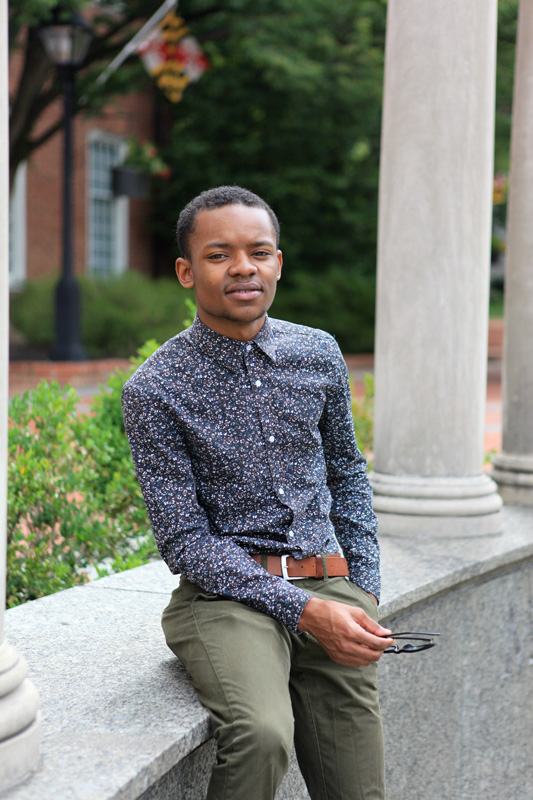 Amid the din of the crowd and background blues music, DaJuan Gay takes a seat next to a set of gleaming bay windows at 49 West Coffeehouse Wine Bar & Gallery. He adjusts his crisp collar, featured prominently in the V-neck of a heather gray sweater, as he watches various passersby move up and down West Street. “I’m hungry,” he starts before breaking his gaze for the approaching waiter. He orders a single black tea and continues, choosing each word carefully, “I’m hungry for success. I’m starving for opportunity.”

In many ways, Gay embodies the blues music that plays softly as he tells his story; there is a palpable sense of hardship, of tragedy, always tempered with the desire to cry out and be heard as a means of catharsis and, ultimately, growth. 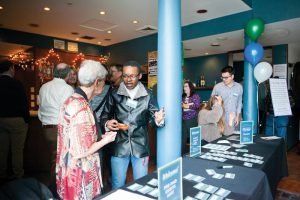 Gay got his first taste of politics when he ran for class president of Annapolis Senior High—an election that he won, as a junior, by a landslide. Friends started jokingly referring to him as Barack Obama, a nickname that became less and less superficial as they realized how serious he really was. During his term, Gay brought together a group of students in an extraordinarily diverse high school environment (30 percent Caucasian, 30 percent African American, 30 percent Hispanic, 10 percent Asian) that ultimately went out into the community and raised $20,000 to help the school get out of debt. “We were a good team,” says Gay,“we made things happen.”

While fundraising for Annapolis High School, Gay was also fundraising for his future. Through GoFundMe, scholarships, grants, hard work, and personal merit, Gay was accepted to Slippery Rock University in Pennsylvania and became a first-generation college student—a fact he can’t help but relate with a smile. Just three months into his first semester, however, Gay was the subject of a racially motivated threat on campus. The incident had such an immediate and profound impact on Gay that he was unable to focus on academics and was back in Annapolis before year’s end. He transferred to Anne Arundel Community College, but the ordeal left Gay with such an overwhelming feeling of failure that he became depressed, with suicidal thoughts. 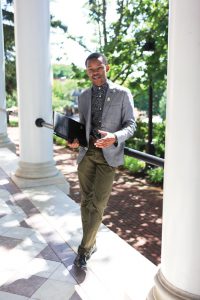 The summer of 2016 put things back into perspective for Gay. Alton Sterling and Philando Castile had just been killed by police officers in Louisiana and Minnesota, respectively, and racial divisions were wreaking havoc on communities nationwide. Gay forced himself to step outside of his personal struggles and figure out a way to bring healing to his beloved Annapolis community. Under the banner of the Black Lives Matter movement, Gay organized a mile-long march with over 300 participants that began at his alma mater, Bates Middle School, and ended at the Kunta Kinte-Alex Haley Memorial at City Dock. Gay couldn’t ignore the tangible impact he was able to have on his community and his own sense of self.

“I wanted to shift that momentum into politics,” says Gay. “I wanted to do things the right way.  I wanted to invest in my community. I wanted to get the community involved and engaged.” In 2017, at age 19, Gay announced his candidacy for alderman for Ward 6 on the Annapolis City Council.

While campaigning, Gay moved back in with his mother and now five siblings in Eastport Terrace. Upon returning, Gay found the tight living situation exacerbated by the lack of air-conditioning. Gay sprang to action, employing his fundraising and community organizing skills, and raised $14,000 in just two days, supplying 85 families, including his own, with air conditioning units.

Gay ultimately lost the race for city council, despite his best efforts and the unwavering support of his family. His day will come, because until that victory confetti rains down, you will find him at 3 a.m. with his face bathed in the blue glow of a computer screen, the electronic hum of that air-conditioning unit ever present, working towards his degree, studying politics, the judicial system, and the rest of it, at that lonely hour when great leaders are made. █ 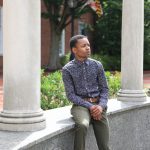 Lawyer’s Mall, a prime gathering location for leaders like DaJuan Gay where voices are heard and stories are shared regarding pressing issues in the greater Annapolis community. Photo by Sophie Macaluso 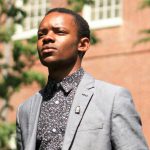 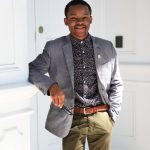 DaJuan Gay poses outside the Maryland State House during a campaign photo shoot in July. Photo by Sophie Macaluso