Just because someone runs you down to the ground does not mean you can’t do something new.

This is a story about two women on a mission. It’s about evolution, inspiration, and the power of friendship. Jade Dee and Wilnona Marie are the masterminds of And I Thought, and forces of nature behind a burgeoning collection of books, lectures, workshops, podcasts, conferences, and television appearances devoted to empowering, elevating, and inspiring women. They host seminars and classes across the globe, helping independent authors by providing a platform for their writing aspirations. Uplifting yet candid, a whirlwind of good energy, they represent the limitless talents of Annapolitans on the world stage. 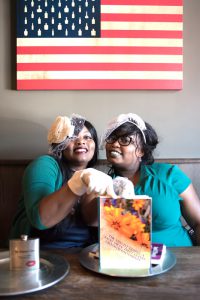 As I swung open the front door to Dry 85 on Main Street to meet them for brunch, I encountered a gaggle of laughter and joined what seemed like a party I was lucky to snag an invite to. But beneath the fun are also stories of pain, trauma, divorce, and hard-worn memories from bygone relationships. They are dedicated to helping other women navigate the survival and rebirth process by sharing their own life lessons through the written word. While completing each other’s sentences, their joy and passion for their work becomes apparent, accentuating the power of their partnership.

And I Thought grew out of the deep bond these two women have shared since birth. While not siblings by parturition, they are sisters in spirit, describing their friendship as being life to them. What keeps them going after long days on the road, in the face of multiple projects and deadlines, is not wanting to let the other down—they are equally invested in the dream, the goal, and the journey.

Dee and Marie grew up on the St. Margaret’s peninsula, just across the US Naval Academy Bridge, in the Brownswoods community. There, nearly everyone is family and shares a rich history of excellence rooted in the African American tradition of family, spirituality, and oral narrative.

Marie describes herself as mostly a poet and a publishing company owner. In between these successes, she was married and divorced. The latter event challenged her belief that she could regain the emotional balance she needed to continue creating and growing as a writer, woman, and visionary. She gave up on poetry for a while, but Dee convinced to return to writing. While driving on Route 50, not quite to the Bay Bridge, Marie asked Dee, “If I were to return to poetry, what would I name my book?” Dee replied, “And I thought divorce was bad!” That serendipitous moment birthed the And I Thought movement.

Marie has since written ten books in two-and-a-half years and, with Dee, built a transformative support system for other women. If she could do just one thing, it would be to save another woman from emotional abuse. She says that, as caretakers, women often believe they need to change to be the person a man needs to facilitate that man’s growth. But she insists that it’s more about how a couple can mutually grow, and she wants women to remember that—it’s about their growth as a woman, too. Dee beautifully sums it up, reminding Marie, “You thought it was going to be the end of you, but it was the beginning of you.” 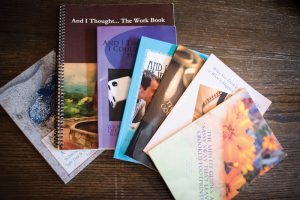 Dee has been married for nearly eight years to a man who not only understands but also encourages her strong bond with Marie. She believes we have different friends who serve different purposes; we have to recognize where they are, who they are, and appreciate them for what they are. She possesses the fearlessness and wisdom of a much older woman. When she speaks, she wraps her words around you, elongating them, matching her need for you to fully comprehend them. Speaking about female friendships and the threat that many men feel they pose in their relationships, Dee says, “If someone is a real friend, they are going to remind you of who you were and why you liked this person in the beginning.”

The duo started the Inspirational Women in Literature, Media, and Journalism Conference to honor women who hadn’t been recognized, let alone rewarded, for their accomplishments. These women were the ones breaking glass ceilings as far back as the 1970s, and many were women of color. They paved the way for Marie and Dee to become the powerful voices, leaders, and visionaries of today. Women from abuse shelters are among those who attend the Conference, sharing coping skills that survivors might apply to their own healing and rebuilding.

The And I Thought Ladies are more than Marie and Dee. They include a distinguished list of equally amazing women: Alexis Rose, Lin-Dub, and Shel-Bee. In addition to inspiring others, as facilitators at women’s conferences, the And I Thought Ladies have been guests on television shows across the United States and in the United Kingdom. You can catch them on the And I Thought podcast, a Google Hangouts channel, a Roku channel, Drystone Radio, UK Indie Lit Fest 2018, and elsewhere. And I Thought Divorce Was Bad was their first book together, complete with inspiring stories and poetry. To date, they have published four books together;  more are in the works.

We spoke about friendship, survival, self-preservation, healing, and rebirth. As an African American male, I couldn’t help but acknowledge the destructive impact so many men have on women they profess to love. After spending an hour with Marie and Dee, I learned so much and saw how their work has a profound impact on women (and men) who have the privilege of hearing their message.

Emotional abuse can be as devastating and demoralizing as physical abuse. Victims of relationship abuse and trauma may never fully erase their effects, but there is light on the other side of the pain. At every stage of the healing process, every woman needs strong support systems, which can take the form of friendships, information from experts, and advice from women who have lived through similar experiences. As Maya Angelou said, “We need joy as we need air. We need love as we need water. We need each other as we need the earth we share.” █ 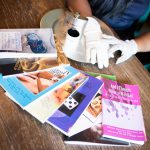 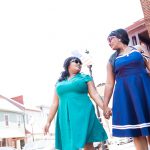 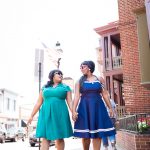 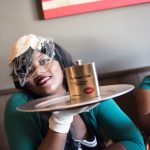 Willnona at Dry 85 in Annapolis displaying a custom flask for The Women’s Cave. 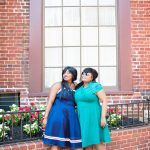 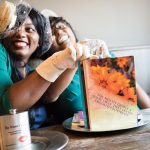 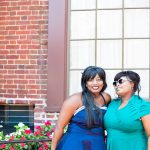 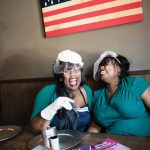 Contagious laughter as Willnona and Jade recount various events that have occured throughout their friendship. 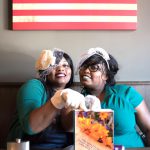 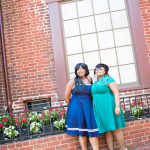 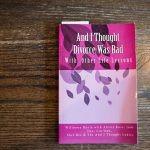 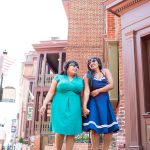 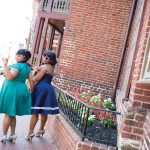 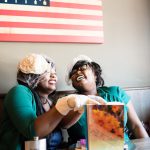 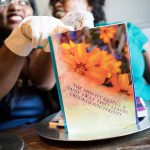 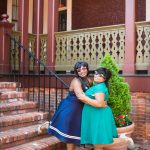 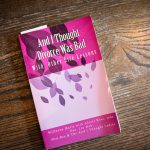 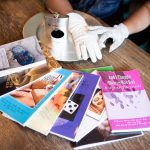 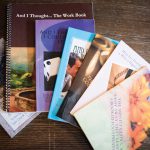 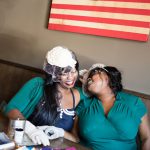 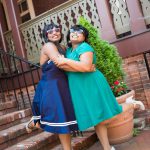