Unexpectedly steeped in fever and overcome by fatigue, Anita Hagan employed her feet as warriors of spirit. They hauled her suddenly dense body over the fleshy terrain, adapting to its mercurial patterns. Just five miles into a nine-day expedition through New Zealand’s Routeburn Track—an entanglement of ice-carved valleys and meadows—she was struck with flu symptoms.

Hagan found the strength she needed to trek on by crashing into her sleeping bag each night and focusing on nature’s cornucopia of sensory experiences during each day. “The outdoors is so simple and beautiful. There’s texture, color, smells,” says Hagan. This draw to nature is one of the inspirational foundations of her twenty-plus-year adventure in art.

It all began with a charcoal swan that hatched forth from Hagan’s fingertips in third grade. From where she obtained the charcoal or how the idea originated remains a mystery. What she remembers is fervently sweeping the granular black stick back and forth across the page, shading, smudging, and getting lost in her creative labyrinth, until what appeared on the paper was her first artistic creation.

Her current artistic works reflect the unflinching curiosity of an architect in the boughs of a steel skeleton prior to applying its skin—the membrane of the creations remaining just translucent enough to summon inquiry by the viewer. Created through linoleum block printmaking, Hagan’s art contains gesticulations of what could be a hungry soul seeking play in unfamiliar territory.

After carving a linoleum block, Hagan first rolls black ink on it, lays painted paper over it, and handrubs the paper to transfer the ink. This impression is used to determine where the paint will be applied on another sheet of paper. She then paints a piece of Korean kozo rice paper with golden acrylics. The result is an exciting and vibrant piece of artwork in which the motion of the golden brushstrokes mesh with the powerful carved effect of the block.

“I am inspired both by the natural world and all its unkempt beauty, and the incredible human spirit,” says Hagan, as she expounds on her affinity for the subjects of her works, which most often take the form of people who carry the whimsy and uncertainty of nature within them. “I’m always trying to get inside of people’s heads and understand them through my work.” 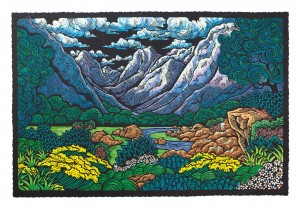 Her curiosity was partially fed by living in so many places with her parents and spending so much time with her mother, who had a deep awareness of nature. She recalls childhood camping trips with her family when Hagan’s mother would point out insects, flora, fauna, and other natural paraphernalia. Other times, she would awaken her in the middle of the night to admire meteor showers.

Hagan, a self-professed introvert, has inherited many of those qualities. Untethered to fear of the unknown, she has hiked in Botswana as well as in parks and wilderness areas in California, Washington, Colorado, Utah and other parts of the Southwestern United States. “I go backpacking by myself in Shenandoah. There are plenty of reasons that make that a bad idea, but there’s the unknown, and that makes it good!”

Hagan likens her affinity for solo hiking to a hurricane. “Big events stir internal conversations. I think [a] natural phenomenon, even when affecting in a negative way, is powerful stuff and it’s exciting. When I watched hurricane Sandy make its way here, it was crazy. Once it started, it was like ‘hold on for the 20-hour rollercoaster ride!’” It’s the mixture of fear, wonder, and excitement that ignites Hagan’s internal dialogue and inspires her art. “For years, I thought the finished product was the painting, but then I realized the process is really where the magic lies.”

Since her mother’s death in 2014, Hagan has spent time pondering what kind of person she would have become, having not known her mother. While she hasn’t answered that question, she has come to the conclusion that a large part of her urge for exploration is about connectivity. “As a kid, I had magpie syndrome [an affinity for shiny objects]—I’d pick up shells, feathers, all kinds of things,” explains Hagan, whose voice climbs to a peak as she explains how the random items she finds now are often incorporated into her paintings.

For the last four or five years, Hagan has started creating mixed-media paintings again. Similar in appearance to her block prints, her paintings often unify dark lines, color, and media such as washers, beads, nails, and fabric, “anything I can throw in there!” She then combines the two, taking smaller block prints and attaching them to canvas with a clear medium that glues them down before implementing accoutrements around the block prints.

In the spring, Hagan will become an adjunct faculty member at Anne Arundel Community College, teaching linoleum block in the evenings. She is also preparing for her upcoming show, Infinite and Unknowable, scheduled for next year at Maryland Hall for the Creative Arts.

Motivated by her passion rather than her success—the former of which she says will always ensure an interesting adventure—Hagan recalls a quote by Eckhart Tolle that declares every living thing has so much depth and complexity that no one person can assume to know that other person or thing. Her words usher quietude as she recounts how all creations, whether flesh and blood or canvas and paint, embody this complexity. Knowing this allows Hagan to surrender to the fact that no artist can please everyone. So she continues to paint and create works that represent and inspire her internal adventure. █ 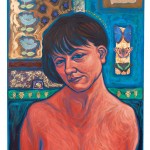 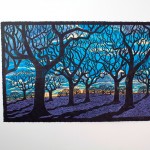 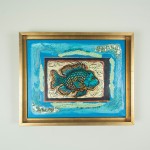 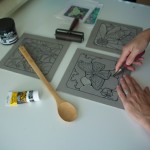 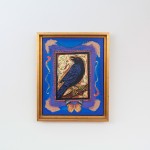 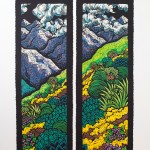 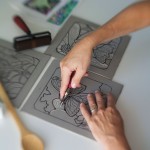 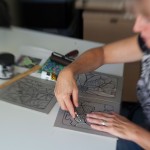 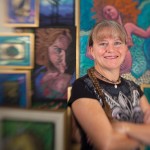 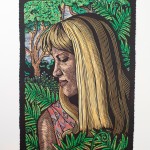 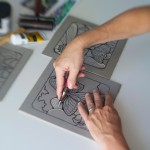 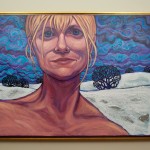 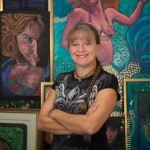 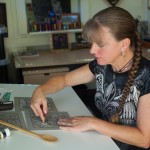 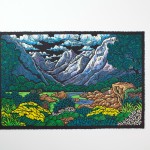 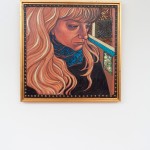