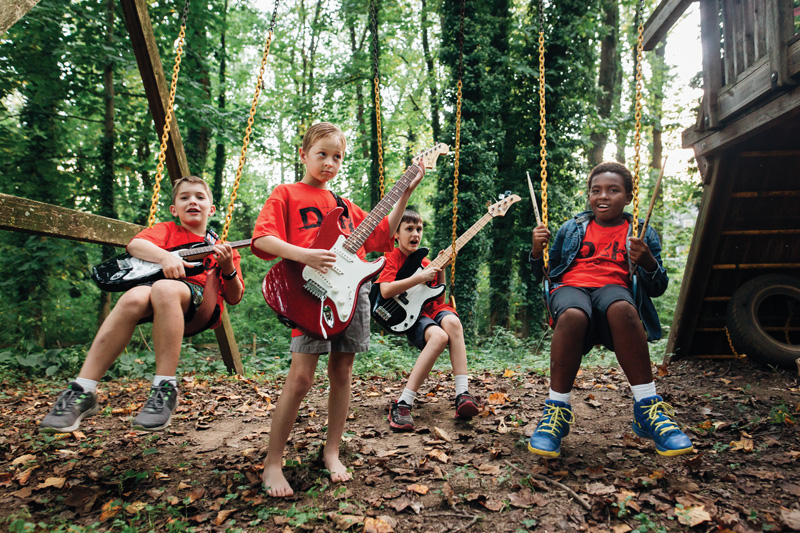 The lyrics from Freddie Mercury’s classic anthem, “We Will Rock You,” burst from the speakers in Studio A, where The Dark, The Red, The Hell (DRH) practice. The band is a foursome of hard-rocking guys who were friends before the fame. They have known each other well near half of their lives. The DRH is James Cravens on lead vocals and lead guitar, Charlie Drayton on rhythm guitar, Rowan Harriman on drums, and Zacca Jackson on bass and keyboard. They only practice for one hour each week because, after all, they have to get up for fourth grade each weekday morning. 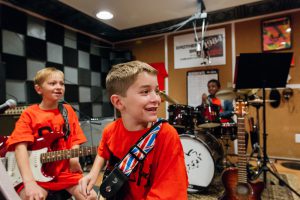 Charlie and James are the two main guitar players for DRH.

At an early age, the rock gods blessed the DRH with talent, ambition, and Studio A right in Cravens’ basement. The band shares the space with Cravens’ parents’ band, Big Brother’s Band. There are no studio fees, the instruments are already broken in, and they can make as much noise as they want. Samara Firebaugh, Cravens’ multi-instrumentalist mother, has supported the DRH from the start. When the boys came to her with the idea to start a rock band, she looked them dead in the eyes and said, “We can do this.”

Flashback to the monkey bars, Naval Academy Primary School, spring 2017. Although who came up the idea remains a point of contention, it was recess—the boys’ second-favorite subject, after lunch—when they decided to start a band. Harriman came up with the name, Cravens offered up the basement, and it was time to rock and roll.

Firebaugh hopped on her laptop later that night and emailed the DRH’s future groupies (i.e., their parents) to see if they were in support. With their blessing, Drayton gave up soccer and Jackson assumed the daunting task of learning bass and keyboard on the fly. By the following Thursday, they were all holding instruments in Studio A, looking around at one another and wondering, “How do we rock like Zeppelin?  How do we shred like Sabbath?”

Enter Jake Posko, owner of Severn River Music, guitar teacher, and member of Big Brother’s Band. There was no one better to take the band to the big time, aka opening for an upcoming Big Brother’s Band house party in Studio A. Only two months from that fateful day on the monkey bars, the DRH was ready to take the stage 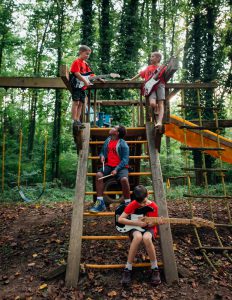 The band assembled every Thursday. Under Posko’s and his teaching partner Diane Riccobene’s tutelage, the band learned power chords, power slides, stage dives, and other rock band basics. Even though only half the group had any significant musical experience, the band progressed at the speed of sound. Within a matter of weeks, the band added Queen and The White Stripes to their repertoire.

After their first show, the DRH was a hit on Meadow Gate Drive. Dreams danced in the boys’ head-bangin’ heads of playing at Metropolitan Kitchen & Lounge. Because they have good burgers, says the band Despite their meteoric rise, the band has remained humble and their tastes simple.

Next on the the DHR tour schedule was Cravens’ backyard birthday bash in August. As the band began preparing for the gig, something dawned on them: playing for their parents’ friends was one thing, but playing for their own friends was a much more serious proposition. It was time to tighten up. They recruited the savviest rock and roll manager in North Annapolis, Cravens’ 12-year-old sister, Margaret. She stepped into Studio A, took a look around, and said one word: merch. While Margaret got started on designing T-shirts, the band got to work perfecting their lineup.

Their second show was a smash, and Margaret “sold” (well, gave away) every last stitch of merch. By the start of the school year, the DRH were the talk of the playground. But being back in school opened up a deep well of angst that had replaced pool water and sunshine all summer. It was a well that they mined for their first original song, “School Time in Hell.”

The DRH have added a new member, Cravens’ puppy Pete, to whom they dedicated “School Time in Hell.” For the most part, though, practice is still the same—Jackson is down in Studio A, slappin’ the bass at ever-escalating tempos, Drayton is working out finger-knotting bridges, Harriman is punctuating every joke with a ba-dum-ching, and Posko is erupting into spontaneous applause for his fledglings. And at the end of band practice, the parents all come to retrieve their rockers with smiles on their faces. It’s a funny thing—rock and roll started as a way for youth to rebel against their parents, but when done right, it brings families closer together. █ 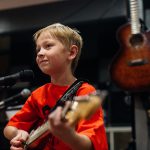 Rowan is the drummer and sometimes sings for DRH. 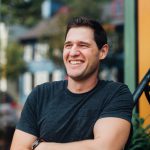 Jake Posko, owner of Severn River Music, has been teaching James since 2013 and helped the boys form their band The Dark, The Red, The Hell in April 2017. He’s been teaching for five years after quitting his full time job to start the business. 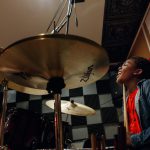 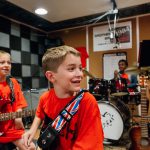 Charlie and James are the two main guitar players for DRH. 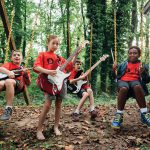 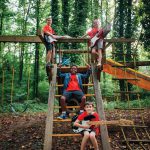 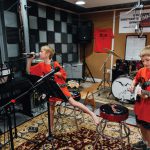 Zacca takes the keyboard while James takes the mic and Charlie plays lead guitar. The band practices in James’ basement. James’ parents are also musicians and have created a studio that the family and band can use. 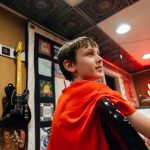 Zacca plays the bass and sometimes the keyboard for DRH. 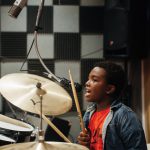 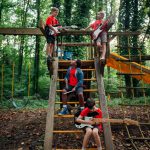 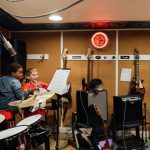 Rowan and Charlie goof around before band practice starts. 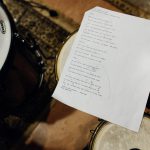 Currently the band is practicing with covers and some originals that James wrote.