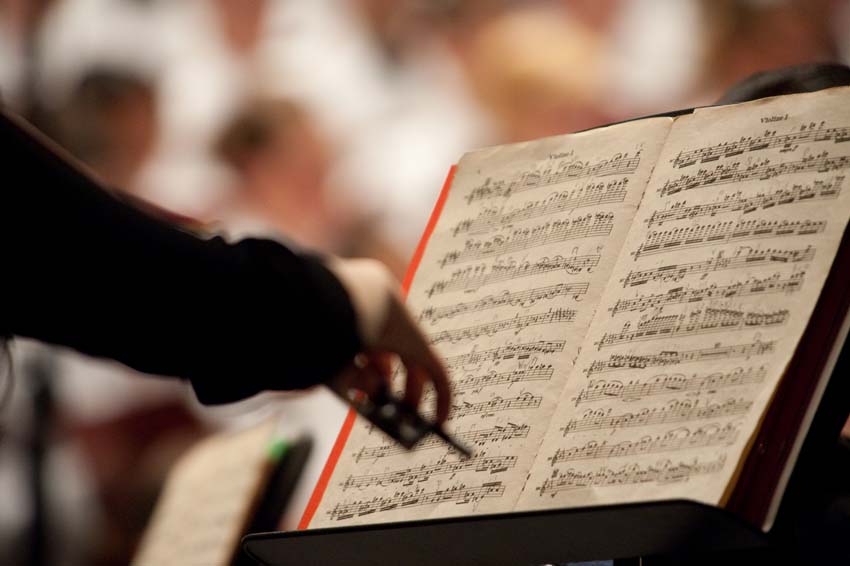 Lean in close. You’re about to be let in on one of Annapolis’s best-kept and unexpected secrets: The US Naval Academy has glee clubs. Plural.

“Once you hear us, you don’t forget,” says Dr. Aaron Smith, the Academy’s Director of Musical Activities. Two ensembles, the Men’s Glee Club and the Women’s Glee Club, perform both independently and together. With a full range of voices, from soprano to bass, they’re able to deliver performances from Beethoven to Broadway.

The ensembles perform all over the United States, offering a gamut of music to fit the occasion, including state functions—they sang in the Capitol Rotunda for President George H.W. Bush’s funeral service and for Senator John McCain’s funeral service. They also collaborate with organizations such as the Annapolis Symphony Orchestra and the Minnesota Orchestra, perform at ceremonies such as The Kennedy Center Honors, and make their annual appearance in the Academy’s chapel to perform Handel’s “Messiah.”

One of the clubs’ recurring responsibilities is public relations on behalf of the Academy. For this, they travel on outreach tours, helping to recruit and bolster future admissions to the school, a four-year college that serves as the US Navy’s undergraduate college and offers a variety of majors, including advanced mathematics, chemistry, and physics. All students graduate with a Bachelor of Science degree.

“Almost a quarter of the school participates in music in some form or fashion, which I find stunning in a very positive way,” says Smith. “At a military, math, and science school, we have incredible music.”

According to Smith, they’re accomplishing the evolution of the STEM (science, technology, engineering, and mathematics) curricula into STEAM by adding art to the Academy’s lineup.

Smith enthusiastically describes an upcoming collaboration with the Annapolis Symphony Orchestra to perform Beethoven’s “Symphony No. 9” as well as a contemporary piece with which he has fallen in love—Eric Whitacre’s “Deep Field,” based on images from the Hubble Space Telescope. It is a 25-minute choral, orchestral, and multimedia work that includes a video of images displaying the immensity and vastness of deep space. The audience is afforded the opportunity to participate in the last five minutes by using a pre-downloaded phone app. At a specific time during the performance, the conductor cues the audience to launch the app, and 2,000 people become like stars of the universe through the app’s visual and audial components.

For ensemble members, rehearsal time is miniscule for such ambitious endeavors, with practice just twice a week for about an hour, compared with other schools that might pack in six hours of rehearsal a week. “They’re able to do miraculous things in a limited amount of time,” Smith says. “That’s the beauty of working with smart and fast young people—they’re able to pull off things other colleges couldn’t do in the time given.”

Smith describes himself as a lifelong choir nerd. Originally from Texas, he has been involved in music since age four and a professional musician since he was 15. Work brought him to Manhattan for a number of years before he landed at the Academy, where he’s been for 13 years. He’s a choral specialist, consistent with his academic degrees.

Smith’s technique involves garnering all of those individual voices into a cohesive whole and making beautiful sounds that people want to hear, meaningful for both the choristers and the audience. “That’s the mark of a good ensemble,” he says. “If they’re being moved by the music they’re producing, the audience will [be, too]. If they don’t care, the audience won’t, either. The mark of a bad ensemble? It isn’t worth it for anyone.”

Add an orchestra and coordinate all of the voices and instruments. What looks and sounds easy when working well is anything but that.

“The reason I do it is because it scratches every itch. It’s giving of one’s self, it’s collaborating with others, being symbiotic, a team. The conglomerate is always making something greater than the sum of all its individuals. That might be why it resounds so well at the Naval Academy: There’s no such thing as a solo mission, you’re always part of a team and always striving for excellence.”

The glee club members give up their spring break to do their outreach tour, performing about 20 concerts in 10 days—while other college students may be traveling to lounge on a beach somewhere. No one seems to mind, as working together has forged strong friendship bonds. All tallied, they might do anywhere from 40 to 50 performances annually, compared with other colleges that may only manage a handful.

“We can set exceptionally high bars for mids, and they’ll reach and even surpass them. It’s what’s expected from them every day, and what they’re taught to do when they’re out in the fleet,” says Smith. “They never disappoint nor cease to amaze.” █