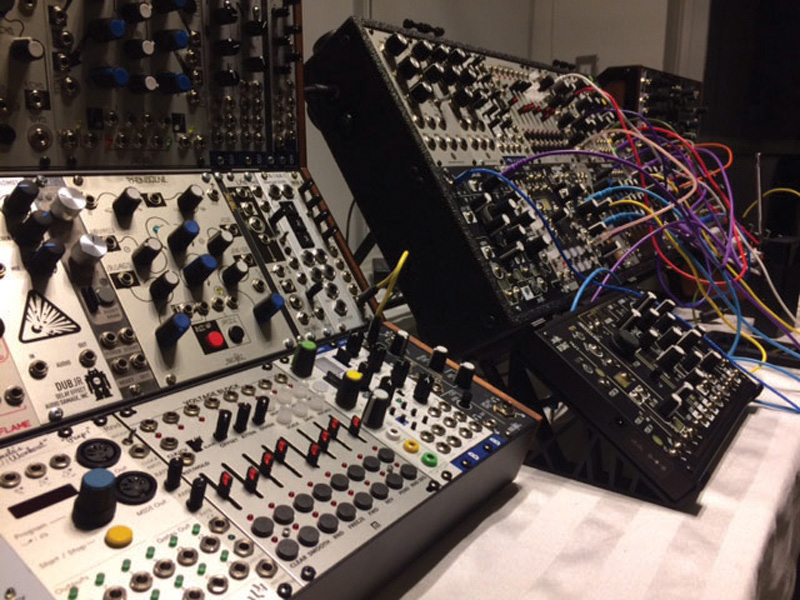 The twentieth-century conductor Leopold Stokowski said, “A painter paints pictures on canvas, but musicians paint their pictures on silence.” Musician, composer, and electronic music artist Bill Pettaway splashes the jingling of swaying wind chimes with warm laughter or dubs the rip of a car’s hand brake over a bass plucking a heartbeat on a canvas of silence as intentionally as Jackson Pollok would throw paint. Pettaway, 57, awakes at his home in tropical Miami as early as 3 a.m. to begin composing, and sometimes he does not stop until 3 a.m. the next morning. His passion for modular music challenges him to create the next level of sound (audible art). 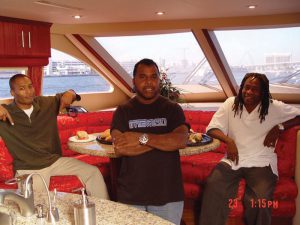 The Annapolis native describes what he calls his “noisemaking” with modular synthesizers as “future music” that has the potential to become background composition for film or television. “I love electronic music,” says Pettaway. “It’s got me addicted to it. I sleep this. I live this.” Pettaway alternates notes and overlaps rhythms, merging the synthetic and the ambient with the harmonious and the discordant. The results stimulate the auditory senses, evoking visuals and emotions of films yet to be made—eerie suspense-thriller montages, intergalactic science fiction, and wanting flashbacks of familiar voices.

Childhood friend and fellow musician Mike McHenry attests to Pettaway’s early passion for and fascination with crafting sound, and credits him as one of the “best guitar players I’ve ever heard.” The two became friends in middle school and attended Annapolis High School together. McHenry recalls endless hours jamming together on guitars in Pettaway’s basement after school. “Other kids were trying to imitate Kool and the Gang, and we were trying to figure out what they were listening to on Saturn,” says McHenry, who describes Pettaway as a ball of energy and highly creative. “He’s outside the box. His mind is not restricted by rules. With his music theory knowledge on top of his musicianship, he is second to nobody,” exclaims McHenry.

After high school, Pettaway received an intensive music education at the Southwest Guitar Conservatory in San Antonio, under legendary guitarist and founder of the school, Jackie King. 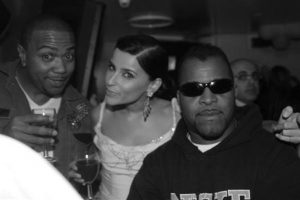 Outside-the-box thinking meant Pettaway was often misunderstood in his early school years. He remembers teachers not knowing how to answer his unique questions. This dynamic, combined with undiagnosed dyslexia, resulted in his being mistakenly placed in special education classes until an advocate later corrected the error. Pettaway chose not to react negatively and instead designed his own curriculum. He practiced guitar in between customers at his job pumping gas on the corner of Chinquapin Round Road and Forest Drive. When he wasn’t jamming with McHenry after school, he would walk from Parole to the well-known jazz club, King of France Tavern, on Main Street, in the basement under the Maryland Inn (now a coffee shop). “Someone would put a chair out[side] for me to sit right near the door because I was too young to be near the liquor, and I would sit and listen for hours,” he says. “If I had enough money, I would buy a ginger ale.” He studied every intonation and beat of jazz giants like Maynard Ferguson, John Scofield, Jimmy Bruno, and The Grainger Brothers. “I saw the future. I knew what I was going to do. It was in my spirit to do it. I was going to play music. I just wasn’t sure at what level I would make music,” says Pettaway.

In 1989, Pettaway received his answer when pop music’s Milli Vanilli did a remake of Pettaway’s “Girl You Know It’s True,” a song he composed and originally recorded with the Baltimore-based group Numarx. In the decades since then, his talents and consultative and creative contributions have been coveted at the highest levels of professional musicianship. A small sampling of Pettaway’s credits includes writing lyrics and composing for rapper Jay Z’s album The Blueprint Collector’s Edition and playing guitar on Missy Elliot’s “Respect” and “Under Construction,” Timbaland & Magoo’s “Indecent Proposal,” and Justin Timberlake’s “Cry Me A River” and “Sexy Back.”

Remarkable still is that when Pettaway was in between recording gigs for some of the biggest names in music, he would come back to Annapolis to work at the same gas station and later, car rental business. “Sometimes I have to escape and do normal things,” says Pettaway. He attributes his work ethic to the values instilled in him by his parents. “Working gives you people skills. I learned everything I needed to know about people from that gas station,” he says. It was also at that gas station, during the 1990s, that Pettaway discovered musical artist Toni Braxton, and subsequently introduced her to the people who launched her career. 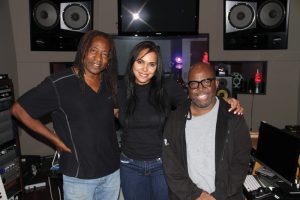 Now far from the sailing town he once called home, Pettaway watches for dolphins, crocodiles, and stingrays from his seventeenth-story balcony overlooking a blue canal and a green golf course. He always envisioned living somewhere tropical and enjoys spending time in nature. “It feels so good to wake up and see the sun,” says Pettaway. Less than two years ago, he defeated non-Hodgkin’s lymphoma for the fifth time in 10 years with the care of best friend Geneva Randolph and an anonymous donor’s bone marrow. Randolph, who has known Pettaway for over 18 years, describes him as the closest person to her next to her mother. She didn’t hesitate to quit her job to become his full-time caregiver. “He’s one of the smartest individuals I’ve ever met. He’s nice to everyone, even when people aren’t nice to him,” she says. The pair just released their first joint electronic music recording, “Esoteric Hair.” Randolph expresses appreciation for the reverence Pettaway’s holds for his craft: “It’s not just the creation of sound or an instrument, it is truly something sacred to him.”

Randolph attests to Pettaway’s positivity even during the bleakest moments of his illnesses. “His spirit always remained upbeat. He has a strong belief in God that his parents instilled in him, and he gave thanks to God every day,” she says. This latest period of illness has informed Pettaway of his next artistic direction. “The cancer helped me. I’m not gonna say, ‘why me?’ I’m still living. I don’t let that stop me from being myself,” he says. There are days where he doesn’t feel well but is determined to follow his heart and his passion. He says, “You say a prayer and you put your shoes on and you get to walking. And you don’t get attached to something, because everything changes.” █ 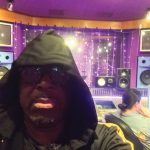 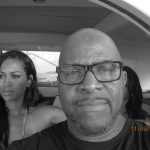 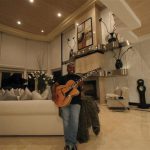 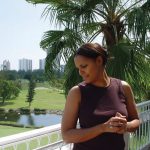 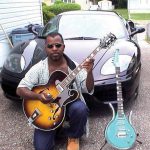 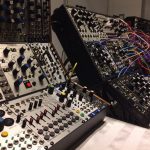 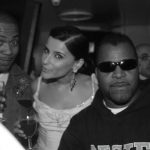 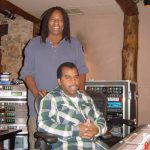 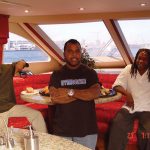 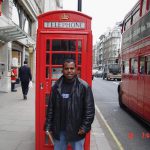 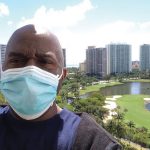 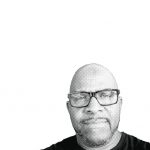 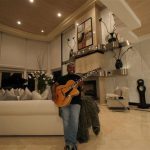 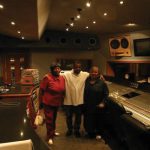 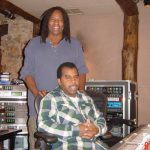 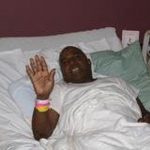 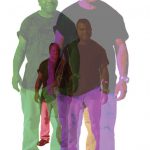 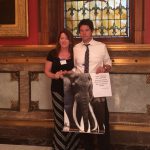 Nancy and Mike lobbying New Jersey legislature for a bill to ban ivory and other animal body parts from being trafficked. It passed and it was the first victory in the nation. Sadly similar bills in Maryland have failed several times. The photo of the elephant is by famed wildlife photographer Mark Deeble and he had given us permission to use it to lobby for that purpose. It is of the famous elephant bull Satao, who was known to hide his huge tusks from humans by getting behind trees. He knew he was in danger of being poached, and he was, shortly before this photo of us was taken in 2014. 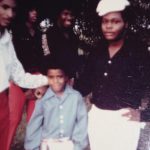 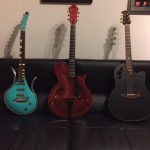 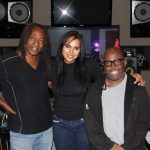 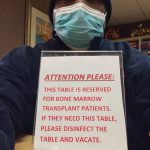