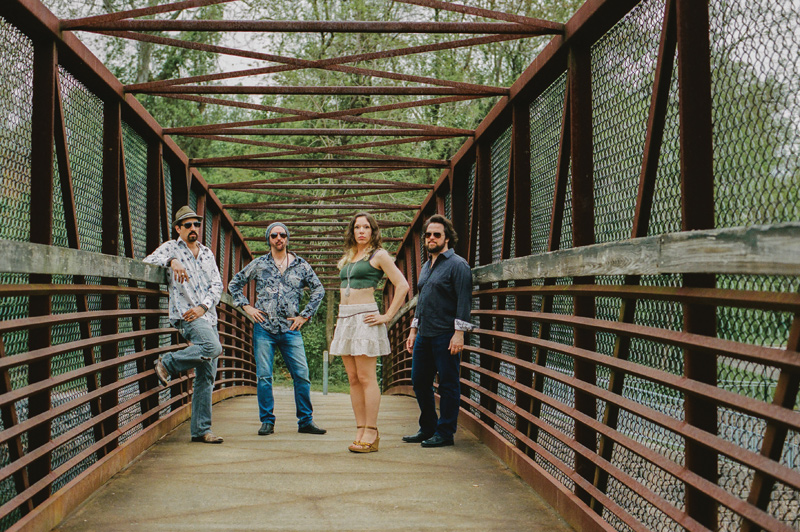 Powerful, lively, and energetic, Sweet Leda engages audiences through their music and even the lens of a camera. Omar, Don, Julie, and Jamie.
Photo by Caitlin Mae ( a Fearless Girls photographer girls)

Lead singer Julie Cymek breathes life into the microphone as the musicians of Sweet Leda pump energy through the crowded space at Middleton Tavern. The once-still hips of the audience start swinging to a gut-thumping beat, and heads bob as Cymek’s lush, sultry notes swirl over the crowd. From the first song of the night, Sweet Leda is the heart that makes the room pulse. Decades of practice flow from Omar El Dieahy’s guitar. Don Boyette drives the beat for bassist Jaime Horrigan to match. They play, attuned to each other with the hard-earned confidence that only develops with trust and time. 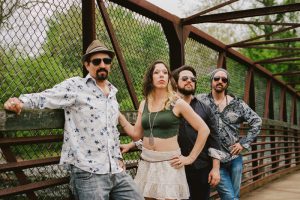 Cymek dances and flips her hair around during instrumentals as if she were singing with a hairbrush in the comfort of her bedroom. Her soul-filled voice rises from her center, inviting the audience to connect. “After a show, I am exhausted. I feel it,” she says. Seeing her perform live, one would never expect that Cymek was once a shy, quiet chorus girl who, like many artists, still faces stage fright. She had never even performed solo before fronting a band. “When I first started fronting a band and writing music, I didn’t know what the hell I was doing, but I had to try it,” says Cymek. Her bandmates and the Sweet Leda fans are all too glad she did.

Sweet Leda has been together for nine years, with the same lineup. Horrigan says that he and Cymek spend at least 40 hours a week on “band stuff,” practicing together and on their own, promoting, booking, maintaining the website, and posting on social media. “So many emails,” adds Cymek. The hours of hard work have paid off. In the last four years, the band has been awarded five Tri State Indie Music Awards, four of which were MD/DC Indie Band of the Year, and one Groupie’s Choice Award. May 2017 was its first appearance at the Chesapeake Bay Blues Festival, an event that hosts mostly national acts. Yet Sweet Leda remains humble and gracious, and maintains its commitment to each other as musicians and friends. 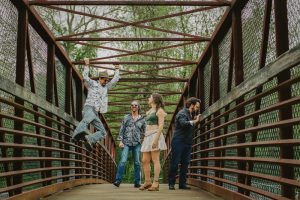 “We are very much a family and see each other a lot,” says Horrigan, the more serious, business-minded of the four. He attributes the band’s longevity to spending time together outside of gigs and practices. “We go to shows together, we are close with each other’s families, and we’re always there for each other,” he says. Boyette, the more talkative humorist, attributes their solid relationships to many inside jokes. As with any band or group of people working together, Horrigan admits that the years have not been without interpersonal strife. “We have struggles, but we’ve always talked through them and shown each other a certain amount of respect. [It’s] like being in a marriage with multiple people,” says Horrigan, knowingly. Cymek and Horrigan have been together for 15 years and married for 11.

The band members feel that making themselves vulnerable to one another has strengthened their creative process. “You need to feel safe to express yourself. Creating art is like exposing your soul; it takes a certain amount of closeness and trust,” says Boyette. Cymek’s description of how Sweet Leda’s songs are born exemplifies this. Most practices open with a warm-up, during which everyone just starts jamming. “Sometimes one of us has something in our head that we’ve been thinking about,” says Cymek, “I start making some noise. Maybe we just start playing random sounds, and sometimes it feels so good, we know we have something.” From there, band members write their own parts and continue collaborating. The results are what they have coined “Rockin’ Soul,” a bluesy, funky, dare-you-not-to-move, two-album collection of original songs created with lots of love.

“On the first album [Need the Music], I wrote more about problems. The second album [Let It In] might pose more solutions,” says Cymek. “I started thinking about what I really wanted to say to people, and the songs are about suggestions on how to be happy.” Cymek professes that caring about people is one of the most important things we are called to do in the world, declaring, “I want everyone to be okay. I want everyone to get along and be happy!”

Cymek’s lyrics are direct and relatable, and her nuanced vocalizations remain cognizant of the voice as instrument. “Let it in; let it begin,” sings Cymek with lingering force on the track “Let It In.” The phrases are looped and repeated, surfing the song’s rhythm. On “I Came Here to Play,” a smooth, steady jazz-funk rhythm backs up poetic vocals. 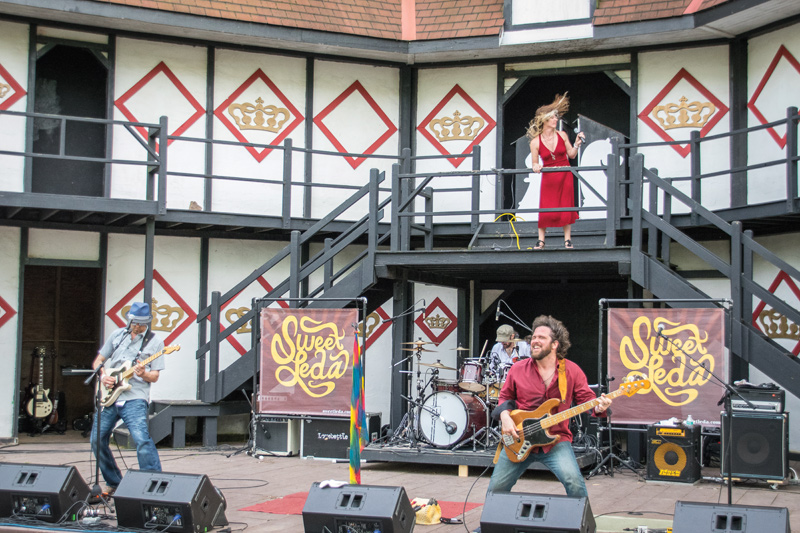 Each band member has favorite songs. El Dieahy’s is “She’s Not Coming Home,” “just everything about it.” he says, sitting back, plucking his guitar. “Let Her Love Her,” was written before same-sex marriage was legalized in Maryland. The song features an inspired rap by Jay Crawdads of Higher Hands. Sweet Leda was driven to make a political statement because of meaningful relationships they had formed over the years with same-sex couples. Wide-eyed and emphatic, Cymek says, “I think it’s important to speak out for things you believe in. We absolutely, completely agree. Love is a beautiful thing, so, yeah, love on!”