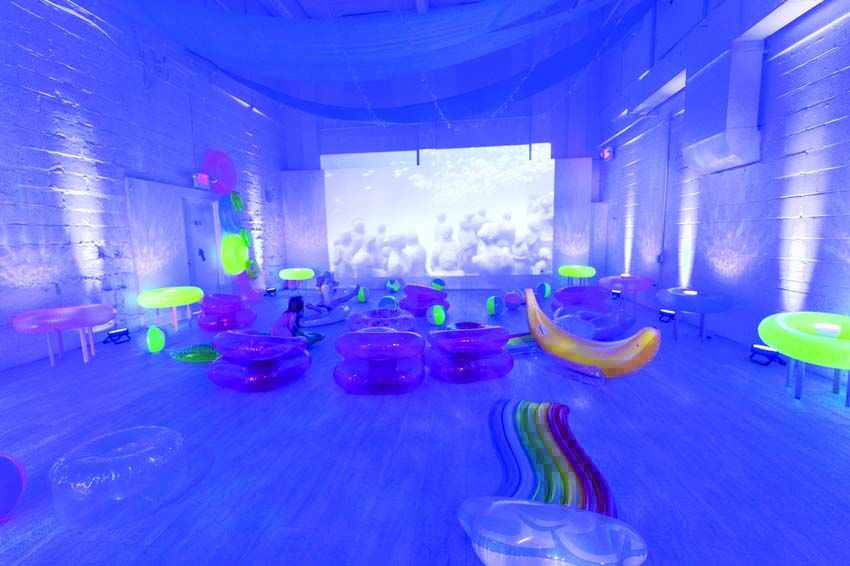 Remember that old two-story cinderblock building in Annapolis, the one off Westgate Circle on Spa Road? Both landmark and eyesore, it was where Arundel Rug Cleaners operated for more a half century, before closing in 2005.

Look now. Where rugs were once washed, hung, mended, dried, and sold, photographs are shot, prints are made, illustrations are sketched, paintings are painted, and art exhibitions are hosted. Such creative activities are the result of a number of reincarnations and renovations that have turned the building, now with a stucco-like facade and painted mostly sandy beige with bright pastels, into a haven for artists. With about a dozen tenants, including designers, photographers, furniture makers, painters, illustrators, an event planner and a Zen healer, it holds more artists and other creatives than any other privately owned building in the Annapolis Arts District.

Chuck Walsh is the building’s owner and landlord. He also heads ArtWalk, a nonprofit that publicly displays art in Annapolis. “I’m not an artist,” says Walsh. “I’m a retired telecommunications lawyer who loves art. I like being around creative people.”

In 2008, the Maryland Arts Council designated what is now the Annapolis Art District—47 acres largely along West Street, from Calvert to Russell Streets. The designation, made at the request of businesses and artists and at the urging of elected officials, provides a variety of tax breaks designed to support artists and boost the neighborhood. Erik Evans, the Art District’s executive director, says, “Circle Creatives is a great addition to the Arts District. It mixes different artists into one building. They can walk down the hall and exchange ideas.”

The Arts District is packed with restaurants, coffee shops, hotels, stores, and residences. Circle Creatives provides artists with what they may need most, space—more than 7,000 square feet of it, all on its first floor. Walsh is trying to come up with an economically feasible plan to open an additional 5,000 square feet on the second floor. If the city approves, he hopes to double capacity to two dozen tenants. Several artists have already inquired, including a potter and two more photographers.

Photographer Marcus Chacona moved into Circle Creatives in 2019, from a studio a half block from the Arts District. Before he got married and had children, his clients included touring rock bands. He now focuses on weddings, portraits, and corporate advertising. “I wanted to be in the Arts District. It has definite benefits, like the tax breaks and being among other creatives,” says Chacona, seated amid his old photos, including ones of the rock band ZZ Top and rapper LL Cool J.

In December 2018, Maureen Porto, a portrait photographer working out of her Annapolis home, went to Prism to rent space amid its 3,000 square feet for a corporate shoot. While there, she saw Circle Creatives. “I immediately fell in love with the place,” she says. That day, she rented a studio there, moved in the next month, and quickly bonded with fellow artists. “Together, we’re growing the Annapolis creative community,” she says. “In June, we had an art exhibition at Prism and later had a huge party in the parking lot.”

Sally Comport is a widely respected artist whose paintings and illustrations appear in a variety of books and museums as well on the walls of major buildings. In October 2018, she moved in. “This is prime real estate for artists,” says Comport. “There are so many possibilities for sharing gallery space, shooting space, and all sort of creative space. You can feel the buzz.”

The vast majority of artists in the Arts District are located at Maryland Hall for the Creative Arts. Most of the other artists in the Arts District may well be at Circle Creatives, but no one knows for sure. Artists routinely struggle financially, uncertain if they will make it, and often they quickly come and go. To help artists, Walsh offers six-month leases. A longtime tenant calls the rent “artist friendly.”

In 2006, a year after Arundel Rug Cleaners moved out, Walsh and a business partner bought the building. They initially rented it as a sales center for condominiums and then as a marketing office for the nearby Westin Hotel. In 2008, they began renting to a variety of professionals, including artists, financial planners, a yoga instructor, a local church, and a theater group, and named the building The Circle Office Center. In 2018, Walsh bought out his partner and continued renting to a host of professionals. That same year, one of his tenants, Jen Casey, a portrait and landscape photographer, made a suggestion. “Chuck, there are tons of artists looking for space in the Arts District, and there isn’t much of it,” Walsh recalls her saying. “Why not focus on artists and the creative community?” He responded, “Okay, I’ll do it. Let’s see if it works.” At the recommendation of his tenants, who in September were for the first time all creatives, Walsh renamed the space Circle Creatives.

This past summer, Casey moved out of Circle Creatives and into a Delaware beach house that she bought to host photography workshops. “I’m sure I’ll be back at some point,” she says. “The thing that is really special about Circle Creatives is that each business retains their individuality as artists and entrepreneurs. The life of an entrepreneur can be lonely,” she continues, “so it’s important to have a space that allows for synergy and community without compromising individuality.”

Kim Hovell, known for maritime-themed paintings, recently moved into Casey’s old space. “It’s good to be in the Arts District,” Hovel says as she paints images of oysters on the wall outside of her studio. “It’s the place to be.” █