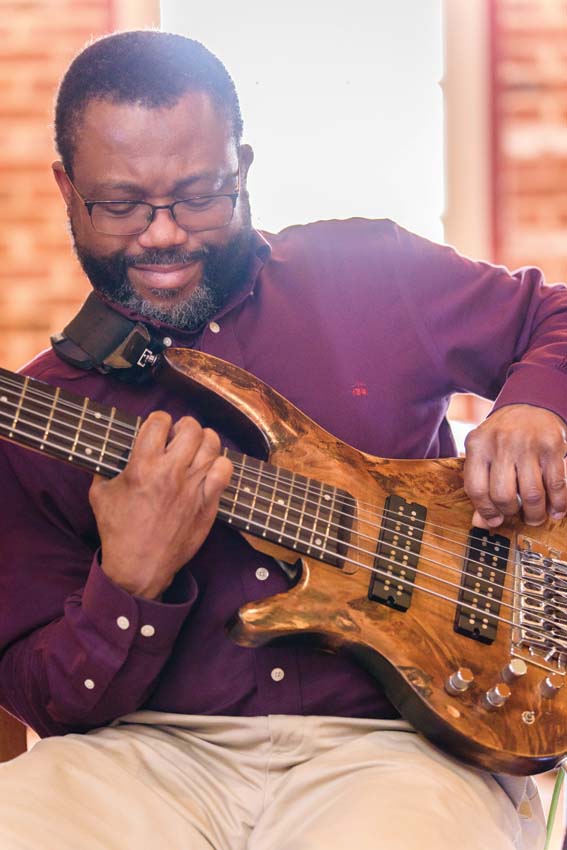 Ben Grant performed with elite US Navy bands around much of the world, playing for, among others, US presidents, NATO allies, and parading midshipmen at the US Naval Academy. Tonight, he’s at the School of Rock Annapolis, teaching five teenagers to be a cohesive rock band.

“You sound good, but not great,” the retired Navy chief musician tells the drummer and bass guitarist after they play a few bars of the British pop song “5 Colours in Her Hair.” “You need to be together,“ says Grant. “Do it again.”

They do it again and sound good. But, as far as Grant is concerned, it’s still not great. “Together,” he demands. “Again.”

They play it over and over, until they are in sync. “Yes,” says Grant, and the young artists sigh relief.

Grant is a bona fide music man—demanding, nurturing, and multitalented. He plays and teaches several instruments, including tuba, guitar, saxophone, clarinet, trombone, piano, and voice. In addition to teaching music, he also plays bass guitar and sings in his own jazz trio, and he subs in other bands as a bassist, singer, keyboard player, or sound engineer.

He’s been an instructor at the School of Rock Annapolis since retiring from the Navy in 2011, ending a 24-year military career that had him him performing in North America, South America, Africa, and the Caribbean. The school in Arnold is part of a network of hundreds of music academies worldwide. “It’s something that I wanted to do for years—teach kids and help them be better human beings,” says Grant, adding that a tough but caring high school band director had inspired him. “He made a huge difference in my life,“ he says.

Like that band director, Grant tries to keep it light. “I tell the kids to enjoy themselves. But when it’s time to work, it’s time to work. That’s my line in the sand. If they take it too far, I’ll bark at them. Then it’s quiet for a bit and forgotten.”

This night, Grant is working with the school’s house band, which performs at community events. Having gotten the rhythm section to play as one, he focuses on the lead guitarist and two singers. They sing, “Everybody wants to know her name.”

Unsatisfied, Grant tells one of the vocalists, “Convince me that you want to know her name. Sing from your gut.” She takes a deep breath and tries.

Grant shakes his head. “Again,” he says. She inhales and nails it.

When the COVID-19 pandemic shuttered so many activities in March 2020, Grant arranged remote lessons to keep band members practicing until they could resume in person. He stopped teaching the house band and focused on individual instruction.

Outside the school, Grant mentors another teen band, Fast as Lightning. Katie Hall, age 15, a guitarist and singer, has performed with that band as well as with the school’s house band. “Mr. Ben is like a music dictionary,” she says. “You can ask him anything. He knows music theory, he knows about being on tour, he knows how to get our attention.”

Music has been a passion of Grant’s since growing up in Sanford, Florida. As a toddler, he got up in the night and banged on a piano, awakening his family. By fourth grade, he took piano lessons. He played the clarinet in sixth grade, and by seventh grade, he played the tuba, which he continued in his high school’s marching band; he also played trombone, saxophone, and bass guitar in the jazz band. “Music came naturally to me,” he says. “It’s a sense of sanity. It puts a big calm over everything. No matter how bad things might be, if I’m playing music, we’re good.”

Nevertheless, as a teenager, Grant preferred baseball. “I loved baseball. But I had neither the talent nor height to progress very far,” says the five-foot, seven-inch former first baseman. From 2011 to 2014, he coached baseball at Severn High School. That, along with teaching music, helped him develop a philosophy for working with teenagers.

“You try to get the kids to think beyond themselves,” he says. “The mentality of a teenager is survival. They are focused on what they are doing, and thinking about what others are thinking about them. You need to get them to listen to each other so they can line up with each other. To be great, you need to play together.”

In 1987, while Grant was a student at Florida’s Seminole State College, a musician at Sea World in nearby Orlando, and uncertain about his future, a former instructor—a retired Navy musician—suggested a career in the Navy. Grant successfully auditioned as a tuba player and enlisted. He initially played with the fleet band stationed in Norfolk, Virginia, and then with one in Orlando, Florida. In 1994, he became a member of the staff band at the US Naval Academy. Duties included playing at dress parades and Army-Navy football games.

In 1999, Grant joined the Navy Band, a premier musican organization whose tasks include performing at presidential inaugurations, state dinners, and international events. Stationed in Washington, DC, it has more than a dozen musical groups. Grant played bass guitar with its then new eight-member ensemble, the Cruisers, which plays jazz, classic rock, pop, and rhythm and blues. He was its first musical director.

Grant’s jazz trio, Oreo, includes two old Navy buddies, guitarist Jim Cunningham and drummer John Parsons. For 20 years, they played during Sunday brunch at the Rams Head Tavern, alternating between the Annapolis and Savage Mill locations. When the COVID-19 pandemic ended that gig, they got a new one, playing every other Sunday at the White Oak Tavern in Ellicott City.

“It’s not like one day I decided to be a musician,” says Grant. “I’ve always been attracted to music. I couldn’t help it.” █