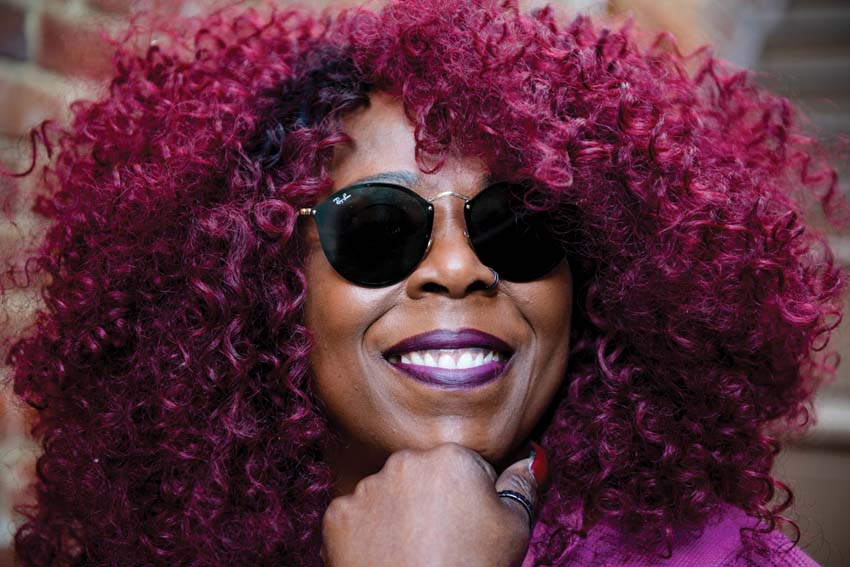 Neci’s deep, sensuous voice has been in our heads for many years, thanks to her late-night radio shows on WHFS and other stations. Nowadays, Neci (last name withheld by request) does fill-in radio shows for Audacy—a group of Baltimore-based radio stations—and spins her mixes for Pilates students and bodywork clients. Her story is about tenacity, perseverance, and a deep love of music.

Neci’s personality is as bubbly as the kale spritzer she’s having at True Food Kitchen. She compliments someone’s wedge sandals, a server’s hair color, and another one’s brows. Always tuned into the music, she pauses in the conversation to Shazam a song playing over the sound system. Her beautifully manicured crimson nails are very long and curved, so she uses a stylus to tap information onto her phone. The song is “Crumbler,” by Jungle. “I do this a lot,” she says. “If I hear a song I don’t know, I gotta have that song. It’s really cool.”

She has been acutely aware of music since she was a little girl listening to her father’s records. “Mashed Potato Time” was a top 10 radio hit in the early 1960’s, when her father took her to a rock and roll show at a New Jersey drive-in movie theatre. Maybe it was the anticipation of getting to see Dee Dee Sharp live, or perhaps it was the excitement of the crowd, but when the emcee announced the lineup, the very young (maybe four- or five-year-old)  Neci said to her father, “This is what I want to do.”

After graduating from Lake Clifton High School in Baltimore,  Neci enrolled in Towson State University. She remembers hearing the college radio station, WCVT, in the cafeteria, thinking, “I can do that.” She ensconced herself in the studio, learning as much as she could, and asked for a chance to spin discs. One day, she got her break when the usual DJ didn’t show up. Soon after, she had her own show. It was AM radio, top 40 music, and Neci was ecstatic.

She was very likely one of the only Black female disc jockey playing top 40 music at the time.

She worked at WCVT for many years. She won’t be specific, but she says that it was a very, very long time. Then she had to make a choice: finish her college degree or make money playing music at a nightclub.

She chose music over academics and became the first Black female DJ to spin discs at the Hippo, Baltimore’s most popular, very gay, mostly white nightclub. That changed her life. Working with DJ Ernie Dunda, Neci learned how to beat mix and work the lights. When Dunda left Baltimore to work at Studio 54, Neci stepped in. Soon, she was working at other discotheques in Baltimore, at Girards, Cignal, and The Rev. She also picked up jobs at other radio stations in town. She played a wide variety of music: urban, jazz, alternative, top 40, reggae, and country.

Neci had a habit of calling David Einstein at WHFS to see if there were any job openings. He finally hired her, somewhere in the 1980s, to host the 2 a.m. to 6 a.m. show. Because she didn’t drive at the time, she would take the bus from Baltimore to the Annapolis Bus Depot on Spa Road, then walk all the way to the Main Street studio with her records under her arm. Every so often, Damien Einstein would give her a ride home.

“What are you doing?” she would ask her late-night listeners when they called the station to make requests. The guys stocking the shelves at the Bay Ridge Giant and the 7-11 would be listening. The law enforcement officer responding to a call requested Pantera. The DEA agent on a stakeout wanted to hear “Mexican Radio.” “There is a photograph of me with Tipper Gore and two of her security guards, who were like, ‘Man, we used to rock you in the Pentagon all the time at night!’” she remembers. “I would get calls from the Naval Academy, or they would yell at my window on their way to the Academy, ‘Yo Neci!’”

She gave “mad love” to her listeners. They were with her all night. And they rarely turned the dial. Neci hosted a local music show and a reggae show. After work, she would take in the local music scene, listening to bands including Ten Times Big, East Is East (who played at her wedding), and Craig Carr. Now, she listens to bands, including Pressing Strings, Jah Works, and Doug Segree.

When WHFS hosted the HFStival from 1990 to 2006, it was known as the biggest music festival on the East Coast. She remembers the Red Hot Chili Peppers getting the whole crowd that filled RFK Stadium moving, and seeing Rage Against The Machine play its last show. She walked around, cruising boys with Fred Snyder from the B52s, and watched festivalgoers misbehaving in the upper rafters of RFK while Fatboy Slim performed his music. “It was pretty funny,” she says. “But there are several bands that I just . . . when I’m in my home, sitting in my chair, rocking, someday I’ll be thinking about some of the bands I met. I met the guys in Crowded House.  And was blown away because I love Split Enz and I love Crowded House.”

One day, in 2006, without warning, WHFS entirely changed format. Neci had been working her usual shift and got off at 6 a.m. Later that day, WHFS became El Zol, a Spanish radio station. She stayed with the station for five incarnations.

The COVID-19 shutdown and aftermath was tough for Neci. She didn’t have a job for over a year. She stayed home with her four dogs, and she played music. Now, she teaches Pilates at Ruah and Sculpt over Zoom. She is the fill-in person for Audacy and goes to whichever radio station needs a substitute DJ. “I’m grateful to be working whenever I can work. I love my job. Any time I get to go in and play, I do,” she says.

She has a dream, but it’s not what one may expect. “I’d like to be the first Black female to do country music in Nashville,” she says. “I did country music for six months. It was great. I had a ball. It was another one of my miracle dreams. I always wanted to be a country radio jock.”

Things seem to happen for Neci, so she may get her wish. It’s really not an impossible dream—which is also a really great song. █