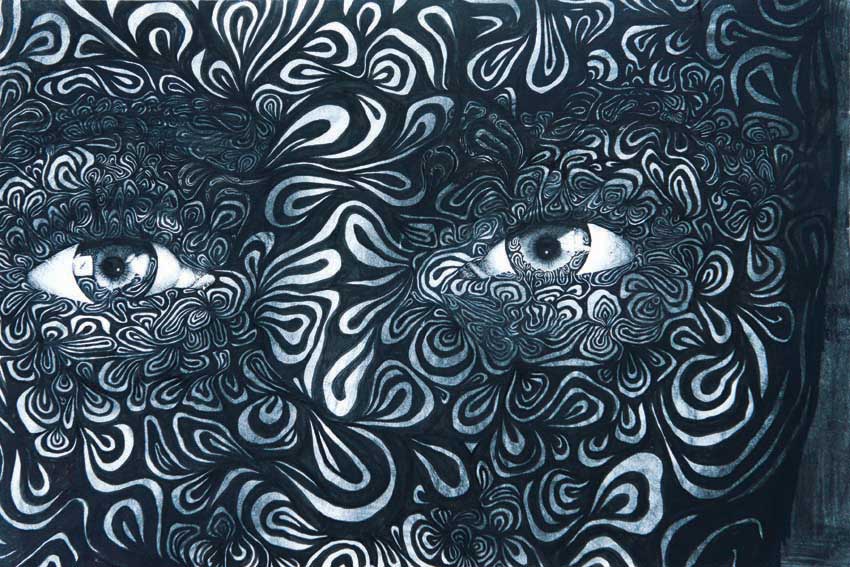 Henley Beall’s life could be a screenplay: talented young artist spends her days working as a barista and her nights sketching and painting. Using Instagram to promote her work, she hopes to beat the odds and make her name without an art school education. She’s not entirely sure how it will work out or whether she can actually turn her creativity into a viable career. Yet Beall is more than okay with that. “Art makes me happy,” she says, smiling, “and I’d rather struggle and still be happy.” Will she succeed? You can’t meet her and not hope that she does.

At first glance, you might imagine Beall is just another twenty-something pulling shots behind the counter of Rise Up Coffee in Annapolis: jeans, baggy shirt, tousled hair, discrete tattoos. She’s a little bit guarded and studiously ironic. And she still lives at home with her parents, Kurt and Lila Beall, in Hillsmere. Named for a family friend, Beall is tall, with long dark hair. Her smile is incandescent, engaging, and transformative, making her hazel eyes glow and dissolving any wariness. Smiling, she has star power.

Talking about art, her own art in particular, makes Beall smile. She remembers being very young when her favorite aunt first taught her to draw butterflies. As a middle schooler, Beall studied at Wiley Bates Middle School’s performing and visual arts magnet program, where teachers Leo Hylan and Jean Orzech helped her develop her talents and taught her the artistic and digital imaging techniques she still uses today.

Beall’s experience at Annapolis High School was more complicated. She loved being part of a diverse public school community, and says she made close friends she would never have met in what she describes as the insular world of Annapolis’ private schools. Still, she chafed at the structure of high school AP art classes. She grew discouraged and gave up on art for a time, playing lacrosse instead, like her brother, Sam, age seventeen, and her sister, Malissa, age nineteen, both of whom still play lacrosse competitively. High school lacrosse was never Beall’s passion, though. “I wasn’t very good,” she says with a laugh, “but the team was fun.”

After high school, Beall spent a semester at college in Florida, but soon returned to Annapolis. She enrolled in classes at Anne Arundel Community College and sought the advice of a family friend, noted Philadelphia cartoonist and illustrator Jim Hunt. Hunt advised her not to borrow money to go to art school but to start making and selling her art on her own terms, without shouldering the crushing burden of student loans.

Still, she needed a day job. Landing at Rise Up Coffee, Beall learned to make specialty drinks, mastering the art of tracing hearts and smiley faces in the froth of customers’ cappuccinos and getting hooked on a daily cortado—a caffeine blast comprising four shots of espresso and a splash of steamed milk.

Along the way, she found inspiration in the work of British photographer Lee Jeffries, who won critical acclaim for his series of stunning, high-contrast, extreme close-ups of homeless men and women. As a street artist who documents people living in the streetscape, he also uses photographic techniques to sharpen the contrast and emphasize the emotion in his subjects’ eyes. Seeing Jeffries’ raw, arresting images, Beall was moved to pick up charcoal and paper, hoping to create art that could speak equally powerfully. She began by using Jeffries’ work as a model and moved on to her own compositions, focusing on faces that convey strong emotion.

Beall’s other interest is psychedelic art, and some of her large, vivid works couldn’t be more different from her starkly detailed charcoal portraits. On days when Beall is more inclined to make bright, dynamic pieces, she likes to explore what she describes as the mathematics of geo-symmetry. Using acrylics and a large panel or paper, divided in half and gridded with a ruler, she allows the design to emerge on one half of the background, using the grid to mirror the shapes and colors on the other side. The result is part pop art, part Grateful Dead art print circa 1979.

Presently, Beall is building her portfolio and exhibiting her work. In September 2018, the restaurant Tsunami featured one of Beall’s first exhibits. She considered it an exciting success because she sold several pieces. She also maintains her presence on Instagram and developed a website on which she shows her work.

Beall has taken inspiration from Annapolis-based artist Jeff Huntington, and she aspires to have her art be as impactful as his someday. No matter how successful she may become, the native Annapolitan has strong ties to her community and its lively public art scene. “I can see myself staying here,” she says, “it’s a happy place to be.” █