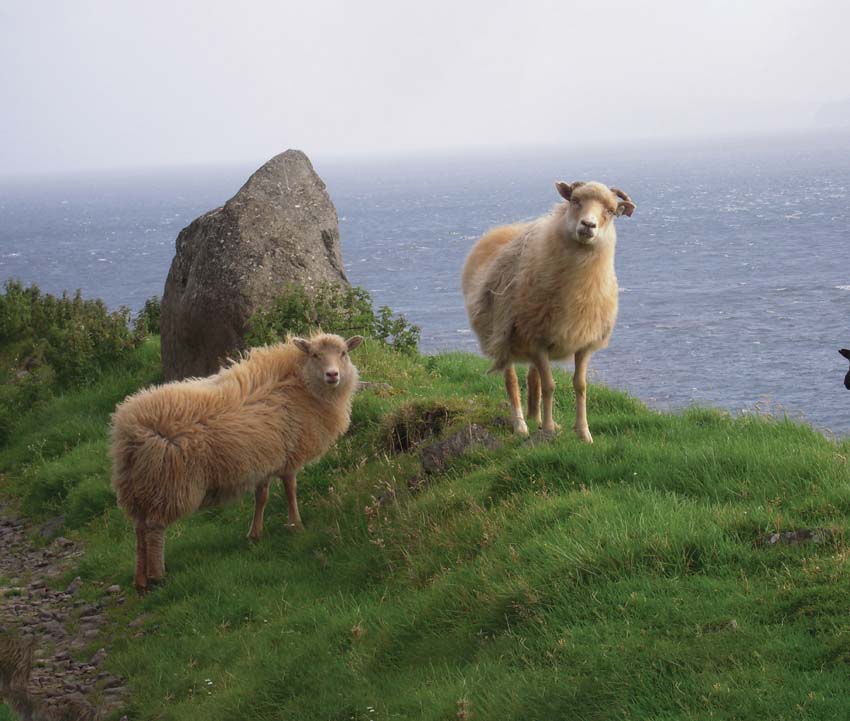 “We’ll drive over the mountain,” the van driver said, turning off the Ring Road and starting up the slope, leaving behind what already seemed like the top of the world. As we rose further out of the city, I gazed at the steep, green hills speckled with rocks, red and yellow wildflowers, sweet grass, and miniature cotton. Sheep dotted the pastures and foraged, slowly roaming the slopes as if they owned the land, which in a way they did.

It was remarkably quiet for a Friday morning. Nearly everyone was sleeping after late-night revelry marking the start of Ólavsøka, the national holiday. The fog had lifted by the time I was picked up. Minutes before, from my niece’s living-room window, I watched the island of Nólsoy slowly emerge through billowy strands of gray cotton-candy clouds. Rain pattered continuously from an overcast sky—a typical summer day on the Faroe Islands.

The airport was about 50 kilometers away, on the next island. I hadn’t traveled this route since they’d built the tunnel for easier access. Riding on it took me back to my first visit, shortly after my sister settled in the Faroes. Those same feelings welled upon seeing the misty, verdant, treeless landscape: wonder, excitement, reverence. They filled my lungs, and my eyes felt as they did when I saw the Grand Canyon.

As we crested the mountain, breathtaking formations that were obscured to riders on the lower road came into view. Channeling my college geology professor, I discerned how the valley had been carved out by glacial ice that, after melting and receding, left large, gentle swaths; they looked like soft, green basins seated atop multilayered basalt cabinets. The fjord below clearly presented as an extension of where the huge water table of ocean met the vale.

“What’s that, over there?” I asked, pointing to the only structure visible for miles, a grass-roofed building nestled into a cliff overlooking the fjord.

“Ah. That used to be the NATO building. North American Treaty Organization. But they left. Now, it is a jail. For drunk drivers.” His pauses lent a unique cadence to his speech.

“Nice view to sober up to,” I smiled.

“Yeh!” He inhaled the word sharply, sounding more like a gasp than a casual affirmation. When I heard someone do that, my very first day on the Faroes, I physically recoiled, thinking that it was a warning that something was about to fall from an overhead shelf. I’ve since found myself articulating my yesses likewise when I’m around my Faroese family.

I was his only fare to the airport that morning. I recognized him when I opened the van’s back door and he asked me to sit up front—he’d picked me up at the airport when I arrived, ten days before. Like many older Faroese I’d met, his manner was reserved. That first night, as we turned onto my nephew’s street and he saw the house where I was to be deposited, he’d quietly said, “Ah, the musician.”

Everyone is either related to or knows everyone else on this archipelago, these “rocks plunked down in the middle of the North Atlantic,” as my sister calls them. One day, my niece’s car wouldn’t start, and someone nearby came over to help. When I turned to introduce myself, she interrupted, grinning from ear to ear, saying, “I know exactly who you are!”

Choral music was playing over the van radio. I wondered if it was one of the Faroese hymns that would be sung at midnight, when everyone gathers in the center of Tórshavn for the close of Ólavsøka.

“You are from the United States?” asked the driver. The windshield wipers hummed as they continued clearing off the rain.

“Yes. I live near Washington, DC, in Maryland.”

“What kind of music do you play?”

I detected a slight smile. “Old country music?” he asked.

“George Jones. Loretta Lynn. Lefty Frizzell. Faron Young?” Spoken slowly, stated more than asked. He knew the old country stars. I’d been watching the masters in their heyday on YouTube, learning their approach and ornamentation, then making the songs my own.

“Oh. I love Dolly Parton,” he gushed, as much as a Scandinavian could, “such a beautiful voice.”

“Her early material with Porter Wagoner is great,” I replied, noticing our shift in tone. I explained that she wrote “I Will Always Love You” as a platonic love song to Wagoner when embarking on her solo career.

“Ah. Yes. They were fine together.” He seemed to reminisce.

I mentioned songs I’d learned, and he nodded approvingly. I noticed, with mild amusement, that I’d stopped pausing. As we drove through a village, the fog swirled through the rain. It felt as though we were the only ones wide-awake on these sleepy islands. Then he spoke.

“Quite a few years back, I was stationed at Thule Air Base in Greenland. Part of the NATO forces. The Americans brought top-notch musicians over to entertain their troops. We all got to attend the concerts. That’s where I heard many country singers perform.”

I looked over at him.

“I got to hear Johnny Cash. Merle Haggard. Many others. It was quite something,” he said, shaking his head, as if in a reverie. “When George Jones and Tammy Wynette came to perform, there was an opening band. She danced with many of us during that opening set. So. I got to dance with Tammy Wynette.”

He gave me a quick, sidelong glance, then turned back to watch the road with a modest smile. It took me some moments to respond.

“She was . . . approachable. Gracious. And a very good dancer!” His eyes twinkled.

He parked the van in front of the airport’s main entrance and walked with me to the ATM, where I withdrew money and paid the fare. We smiled, shook hands, and said farewell.

As I handed my boarding pass to the security guard, the words to George Jones’ song “It Was a Good Year for the Roses” came into my head. I realized that I was already humming the melody aloud. It stayed with me for hours. █